Swift and the BeagleBone Black

**** Update:  We have just built the first robot programmed with Swift and the SwiftyBones library.  You can read about it here:  http://myroboticadventure.blogspot.com/2016/05/the-first-robot-programed-in-swift-with.html  ****

Now that I have completed my three books on Swift (MasteringSwift, Mastering Swift 2 and Protocol Oriented Programming with Swift), I told my daughters that I would take a break from writing books for the summer.  My oldest told me that she wanted to start working on robots again.  At the age of ten, She is already a second-degree black belt, and an instructor in Tae Kwon Do so when she says she wants to do do something I generally listen.  So after a little discussion about what she wanted to do, we decided that we would pull out all of the robot parts and start working with our BeagleBone Blacks again.

I had to start off by doing some reading to catch up with everything that has happened over the past year and a half that spent writing.  In my reading I happened to stumble on the iacheived.it site that showed how to install Swift on the BeagleBone Black. I also found the SwiftyGPIO package (control the BeagleBone Black GPIO with Swift) that was featured on IBM’s Swiftpackage library.  So this got me thinking about being able to program our robots with Swift, now that sounds pretty exciting doesn’t it?

Note: This post and a most of the ones that show how to use Swift with the BeagleBone Black will be crossed posted between my Robotics Blog and my Swift programming blog.

The first part of this post will walk you through setting up your BeagleBone Black.  After we get the BeagleBone Black setup we will write some code that will let us control an LED with a button.  I know controlling a led with a button isn’t that exciting but we need to start somewhere and that really is like a “Hello World” application so lets get started.

Setting up our BeagleBone Black

The following list will walk you through setting up the BeagleBone Black.  Rather than writing out detail instructions I will provide links to the pages that I followed when I set up my boards.  Since I use a Macbook Pro, the instructions are for the Mac.  Sorry, but I do not have a Windows machine to mirror the steps on however the only Mac specific areas in these steps in where we copy the image over to the SD card and the Beagle Board site has a getting started page that may help anyone that uses Windows with these steps.  If you use the Beagle Board site, once you get the image on the SD card, you can skip to step 4 below.

1.  Get the latest Debian 8.3 image from Beagle Board’s site.  You can find the image here.
2.  We need to unzip the images.  We can do this using TheUnarchiver for Mac.
3.  Now we need to copy the image over to the SD card.  I would recommend using at least a 8 gig SD card.  Everything needed will take up 3.3 gig which will fit on a 4 gig card but you are not leaving yourself much extra space.  I use Pi Filler to copy the image onto the SD card.  Once installed, run the Pi Filler app and follow the on screen prompts.
4.  Once you have the image on the SD Card, go ahead and plug it into your BeagleBone Black and power it up.
5.  If you are using a SD card greater than 4 gig, you will need to manually expand the file system since the image only uses 4 gig.  To do this you can following these instructions.
6.  Now we are set to install Swift.  The instructions to do this are on the iachieved.it site.
7.  The last thing we need to do before we start to code is to get the SwiftyGPIO repository.  You can find the repository here.  Under the Sources directory you will find the file SwiftGPIO.swift file.  This is the file we will need to use with our code.

Now that our BeagleBone black setup, lets get ready to do some coding.  We will start by writing some code that will cause our LED to blink on and off.  We will then write a separate application to read the state of a button.  Finally we will combine the code to create an application that will turn the LED on and off with the button.  So lets get started.

Turning an LED On and Off 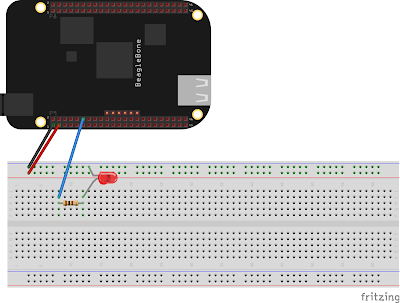 In this file we start off by importing the GLibc module.  In the next line we retrieve the list of GPIOs available for the BeagleBone Black.  Next we get a reference to GPIO_60 (pin 12 of the P9 expansion header).  You can see the GPIO ports listed here.

The next line configures the port direction for the GPIO port.  We can use GPIODirection.IN or GPIODirection.OUT here.  Now we create a while loop.  Within the while loop the first line prints a message to the console letting us know that we are changing the LED.  The next line checks the value of the LED and changes it causing the LED to blink.  A value of 1 turns the LED on and a value of 0 turns it off.  We then use the usleep function to pause before we loop back.

This command uses the swift compiler to compile SwiftyGPIO.swift and main.swift and writes the output to the file named blinkyled.  We are now able to run our application.  If you attempt to run this without super user privileges the LED will not blink.  To access the GPIO ports you will need to run the application with sudo like this:

If everything is connected correctly, the LED should blink on and off pretty quickly.  Now lets look at how we would check the state of a button.

Reading the state of a button

Now that we have the LED working lets look at how we would read the state of a button.  To begin with lets connect a button to our Beaglebone Black as shown in the following diagram.  Keep in mind that whenever we connect anything to the BeagleBone Black we should always disconnect the power.

Now lets power up the BeagleBone Black and write our code to read the state of the button.  Create a directory named button and copy the SwiftyGPIO.swift file to this directory.  Next create a file named main.swift in the button directory and add the following code to it.

In this file we start off by importing the GLibc module.  In the next line we retrieve the list of GPIOs available for the BeagleBone Black.  We then get a reference to GPIO_49 (pin 23 of the P9 expansion header).

If everything is connected correctly, when you press the button you should get a message printed to the console.  Now lets put our LED and Button examples together to turn the LED on whenever the button is pressed.

The following diagram shows how we would wire the LED and Button to our BeagleBone Black (notice no changes from the previous two diagrams just combined them).

The following code will go in our main.swift file:

When you compile this, don’t forget to include the SwiftyGPIO.swift file.  When you run the application, the LED should turn on when you press the button and turn off when you release it.  The following image shows how my wiring looks in real life 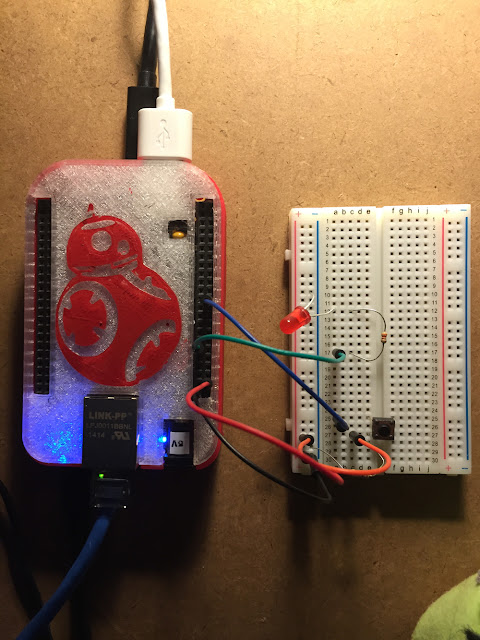 Notice the sporty new BB8 case I made for my BeagleBone Black, pretty cool huh?  Not to mention that BB8 and BBB kind of go together.  Just printed it on my new 3D printer.  I will be talking about the printer in a post very soon and will include links to some of the stuff I have printed and designed including the BB8 case.  I am thinking about making a R2D2 case for my other BeagleBone Black.

If you are new to Swift, I will be discussing some of the basics while I am showing how to use Swift with the BeagleBone black however my assumption is you will have at least a basic understanding of Swift.  I will also be writing more blog posts that are specific to Swift on Linux on my Swift programming blog however if you are really interested in the language I would recommend my Mastering Swift 2 and Protocol Oriented Programming with Swift books.  Please keep in mind that those books talk about using Swift on the Mac however most of the language concepts themselves are the same whether you are using Swift on a Mac or with Linux.

Now that my books are done, you should start seeing a lot more posts on both my robotic and swift blogs.  I do have a question for anyone that might be able to answer: Does anyone know when/if we will see an update for the BeagleBone Black?  I am not talking about the X15 that looks like it is going to be pretty expensive.  I am looking more for an update to the BeagleBone black that will have roughly the same price point.