Swift on the Next Thing C.H.I.P 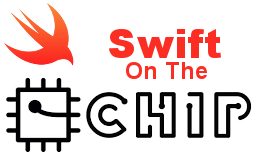 I just received two Next Thing C.H.I.Ps.  The C.H.I.P is a single-board computer, similar to the BeagleBone Black and Raspberry Pi but has a starting price of only $9.00.  If you would like to do robotics or other DIY projects and you are on a budget, the C.H.I.P may be the controller that you are looking for.

The C.H.I.P is loaded with features like built in WiFi B/G/N, Bluetooth 4.0, 1GHz processor and 4GB storage.  The C.H.I.P is also an open hardware platform and you can get information about the hardware on the Next Thing Co hardware github page.

Obviously the first thing I wanted to do once I received the C.H.I.Ps was to get Swift installed on it.  This post will walk you though how I setup the C.H.I.P  and how I installed Swift.  I will end this post by writing a Swift application that will turn an LED on and off.

The first thing I needed to do upon received the C.H.I.Ps was to flash them.  This is done by going to the C.H.I.P flasher page and following the instructions.  One note: You will need to use the Chrome browser since the flasher is a chrome app.  I put the 4.4 headless version on one of the C.H.I.Ps and the 4.4 GUI version on the other.  Once flashing is complete I needed to configure the wireless network adapters on both of the C.H.I.Ps.

Configuring the Network
This is pretty easy to do with the C.H.I.P that has the HDMI adapter plugged into it (the one that I put the GUI version of the OS on) because I could simply plug in a USB keyboard/touchpad and connect it to a HDMI monitor.  I use the Logitech K400 but the K400+ should also work but I have not tested it.

For the headless C.H.I.P, where I could not plug it into the HDMI monitor (only have one HDMI adapter) I ended up connecting though the USB port.  To do this I connected the C.H.I.P to the USB port on my laptop and gave it a minute or so to boot up.  I then connected to the C.H.I.P using the “sudo cu -l /dev/tty.usbmodem1423 -s 115200 “ command from a terminal prompt on my Mac.  For Linux machines you can use “sudo screen /dev/ttyACM0” command to log into the C.H.I.P.  To log onto the C.H.I.P I used the default root/chip username/password.

Once I logged into the C.H.I.P, I used the nmtui utility to set the wireless network.  This is a very easy to use command line utility that will run in a terminal window.

Now that I had the C.H.I.P setup and on my wireless network I could begin installing Swift.  I started off by updating any software that was installed on my C.H.I.P.  To do this I used the following two commands:

Next I needed to setup a couple different repositories to pull packages from.  I did this with the following commands:
echo "deb [arch=armhf] http://repos.rcn-ee.com/debian/ jessie main" |  sudo tee –append /etc/apt/sources.list

Finally, I am able to install Swift with this command
apt-get install swift-2.2

At this point we should have a working copy of Swift installed on our system.  This is the 2.2 version of Swift.  I put instructions on how to get Swift 3 at the bottom of this post.

Testing the Swift installation
To test that Swift is installed correct, you can issue the following command:
Swift --version
It should return something like this:
Swift version 2.2-dev (LLVM 3ebdbb2c7e, Clang f66c5bb67b, Swift 1bf4643998)
Target: armv7-unknown-linux-gnueabihf

For an additional test we can try compiling a file.  Create a file named “main.swift” and put the following line of code in it:
print(“Hello World”)
Save this file and then run the following command to compile it.
swiftc main.swift

This should produce an executable file named main.  We can run it with the following command:
./main
If all is well you should see the message “Hello World” printed to the console.

Blinking an LED – Hardware setup
Now that we have out C.H.I.P configured and Swift installed it is time to see what we can do with Swift and the C.H.I.P.  For this initial project I will simply make a LED blink on and off.  Our circuit diagram looks like this: 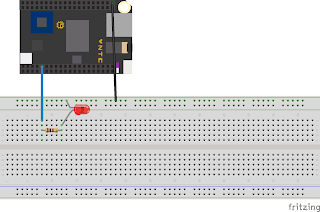 We have a single LED connected to the CSID0 pin on the C.H.I.P via a 100 ohm resistor.

Blinking an LED – Swift SBDigitalGPIO
To access the GPIO pins on the C.H.I.P I modified a couple files from my SwiftyBones framework. You can find the files for the C.H.I.P on the SwiftyBones_CHIPrepository including a main.swift file that contains code from this post.

Lets see how we will use the SwiftyBones_CHIP library by creating an application that will blink the LED that is connected to the CSID0 pin.  The first thing we need to do is to include the SBCommon_CHIP.swift and SBDigitalGPIO_CHIP.swift files in our project.  Now lets create the main.swift file and include the following code in it:

if let led = SBDigitalGPIO(name: "CSID0", direction: .OUT) {
while(true) {
if let oldValue = led.getValue() {
let newValue = (oldValue == DigitalGPIOValue.HIGH) ? DigitalGPIOValue.LOW: DigitalGPIOValue.HIGH
led.setValue(newValue)
usleep(150000)
}
}
} else {
print("error init pin")
}
This code starts off by creating an instance of the SBDigitalGPIO type (this is a value type) that is bound to the CSID0 pin on the C.H.I.P.  The next line creates an endless loop so the led will continue to blink.

We use the usleep() function to sleep for a short period of time before looping back.  That is all there is to it.

Once Swift 3 is downloaded you would need to unzip and untar it.  WARNING:  do not untar this from the root directory, it will overwrite your /usr directory.   The Swift executables like swiftc are located in the /usr/bin/ directory of the file structure that was just untared.