For the experiments in this post you will need a breadboard, an LED, three solder-less jumper cables and one 100 ohm resister.  All of these parts come with Make’s Getting startedwith the BeagleBone Black kit that I mention in my Introduction post.  The 100 ohm resister is the resister with the Brown-Black-Brown-(gold or silver) bands.  If you want to find out the value of your resistors but you are not familiar with the resistor color codes, I would recommend using this digikeypage.

Our BeagleBone:
In this section we will take a look at our BeagleBone Black and explain how we would connect external components to it.  If you look at this image from the BeagleBone Black’s documentation, you will see that our BeagleBoard Black has two expansion headers, they are the black connection strips on either side of the board. 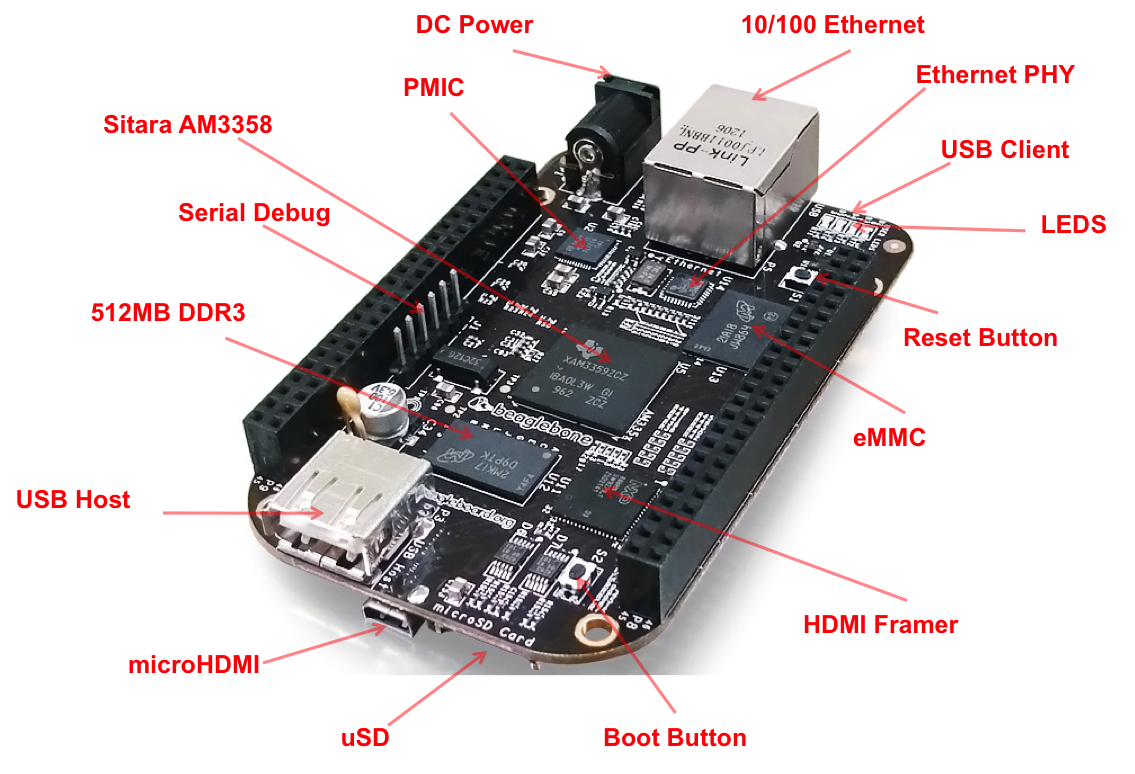 Now lets look at the Cape expansion headers image that is also from the BeagleBone Black documentation.  This image shows you how each pin is labeled and also which pins connect to power and ground. 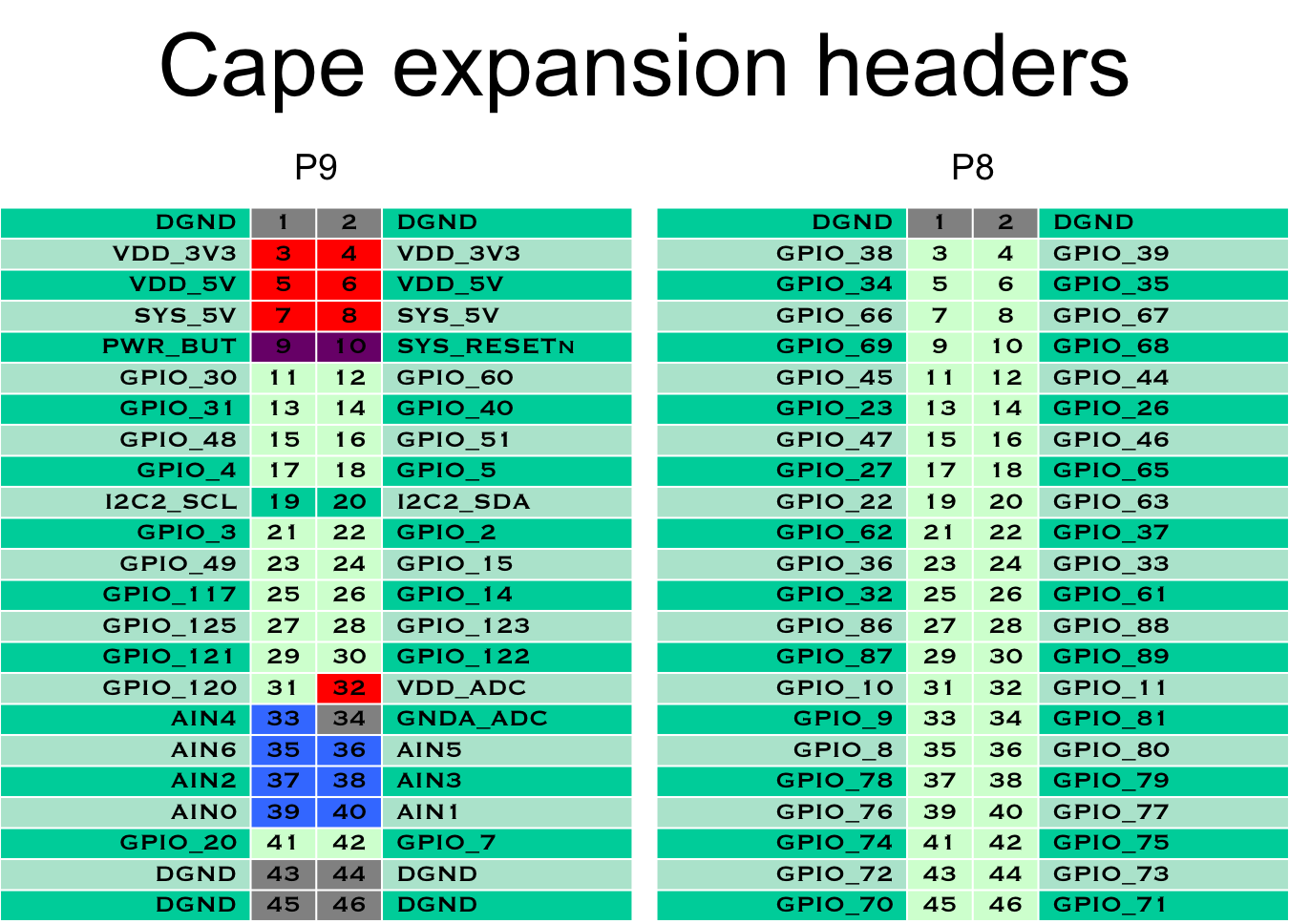 For our first LED projects, we will want to use one of the digital I/O pins because all we want to do is to turn the LED on or off.  This next image, once again from the BeagleBone Black documentation, shows the possible digital I/O pins. 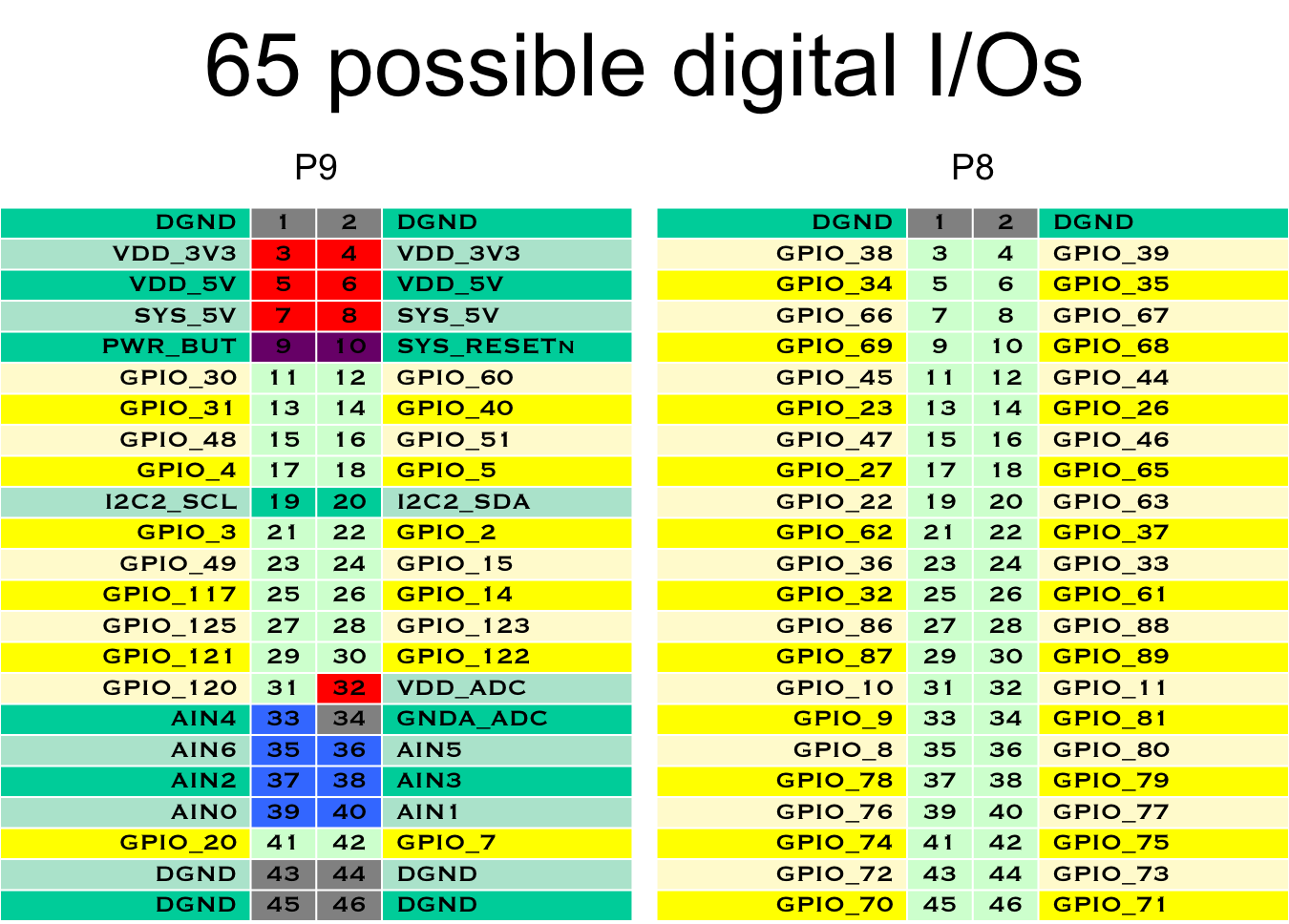 For our first LED experiment we will be using pins 1 and 3 on expansion header P9 to supply the ground and power respectively to our breadboard.  We will also use pin 8 (labeled GPIO_67) on the P8 expansion header for our digital I/O that will control the LED.

The Breadboard:
Now lets connect our external components to our breadboard.  Whenever you connect items to your BeagleBone black, it is a very good idea to disconnect the power first.

The connections should look similar to the following image but hopefully you were neater hooking up the wires then I was. 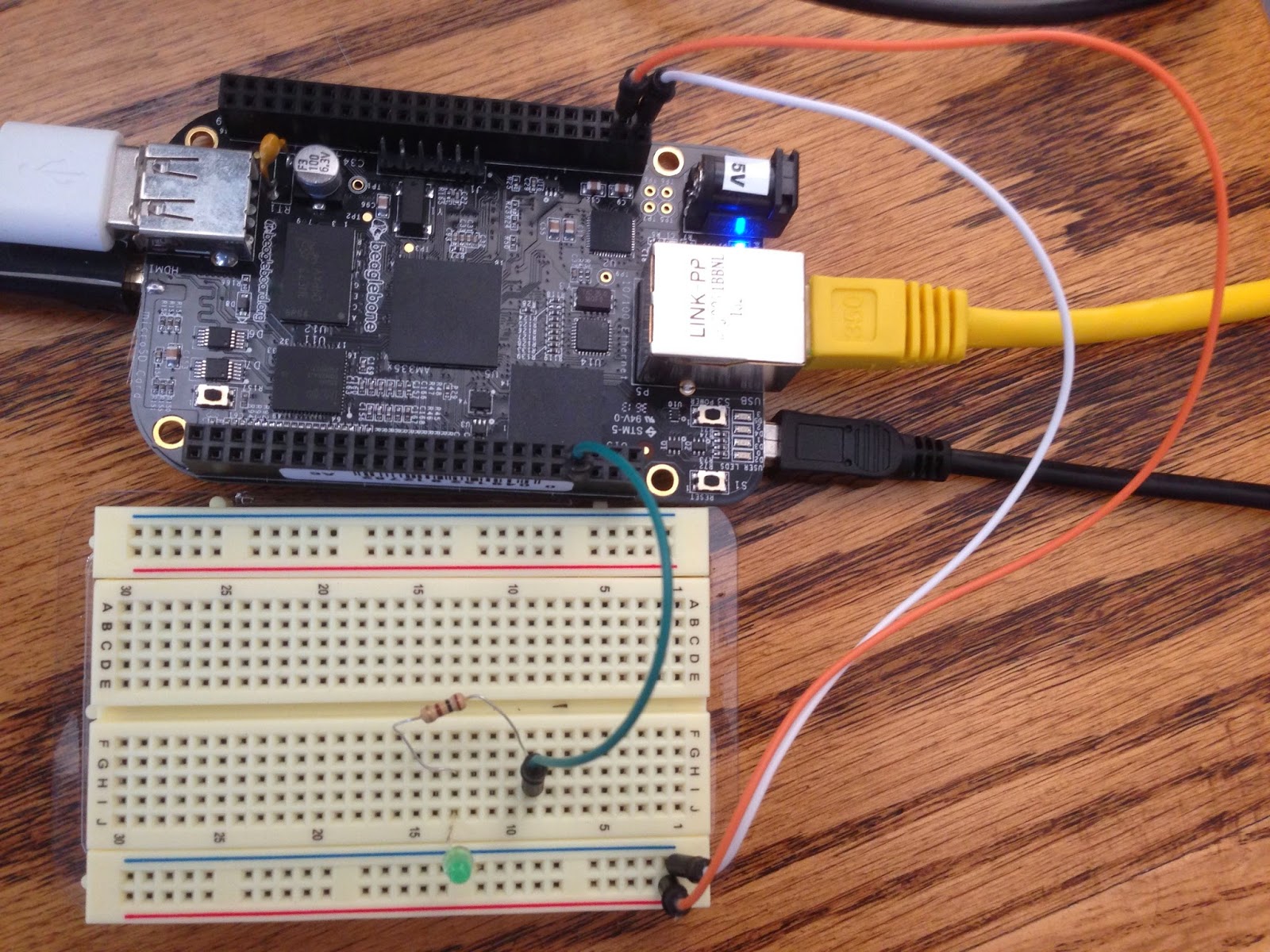 Power up and writing code:
Now lets power up our BeagleBone.   The recommended way to program the BeagleBone Black is to use Bonescript which is an extension of Javascript however I will be using Python with the Adafruit_BBIO library more throughout this blog.  Once I get better with bonescript, maybe I will start using it more.  If you following the Setup Python section of my last post you have the Adafruit_BBIO library setup, if not you will need to setup Adafruit_BBIO before going any further.

I would recommend creating a directory to keep your python scripts in, this way they are not scattered throughout your system.  In your scripts directory create a file called “ledon.py” and add the following code:

Now run the script with this command:

If everything is setup correctly, the led will light up for five seconds and then shutoff.  Lets take a look at how this short script works.  We start off by importing the Adafruit_BBIO.GPIO and time libraries that are needed.  The next line sets up pin 8 on expansion header P8.  GPIO.OUT defines that we want to write to this pin (output data).   If we wanted to read the pin (as if we had a button connected), we would use GPIO.IN like this:  GPIO.setup(“P8_8”,GPIO.IN).  We then set pin 8 to GPIO.HIGH, which turns the LED on (GPIO.LOW would turn the LED off).  Finally we wait five seconds and the script then ends which resets the pin turning the LED off.

If we set pin 8 to GPIO.HIGH to turn it on, then setting the pin to GPIO.LOW should turn the LED off.  Using this assumption lets create a script that will cause the LED to blink on and off.

If you save and run this script, your LED should blink on and off indefinitely until you stop the script.  From here you can experiment some more with your LED.  I am wondering if I can use something like this next winter to control my Christmas lights.  Maybe turn certain lights on or off at various time intervals.

Turning a LED on and off is a pretty cool first step but how about having the LED slowly get brighter.  Can we do this?  Yes we can.  We can use one of the PWM pins for analog writes.  The PWM pins are shown in this image that also comes with the BeagleBone Black documentation. 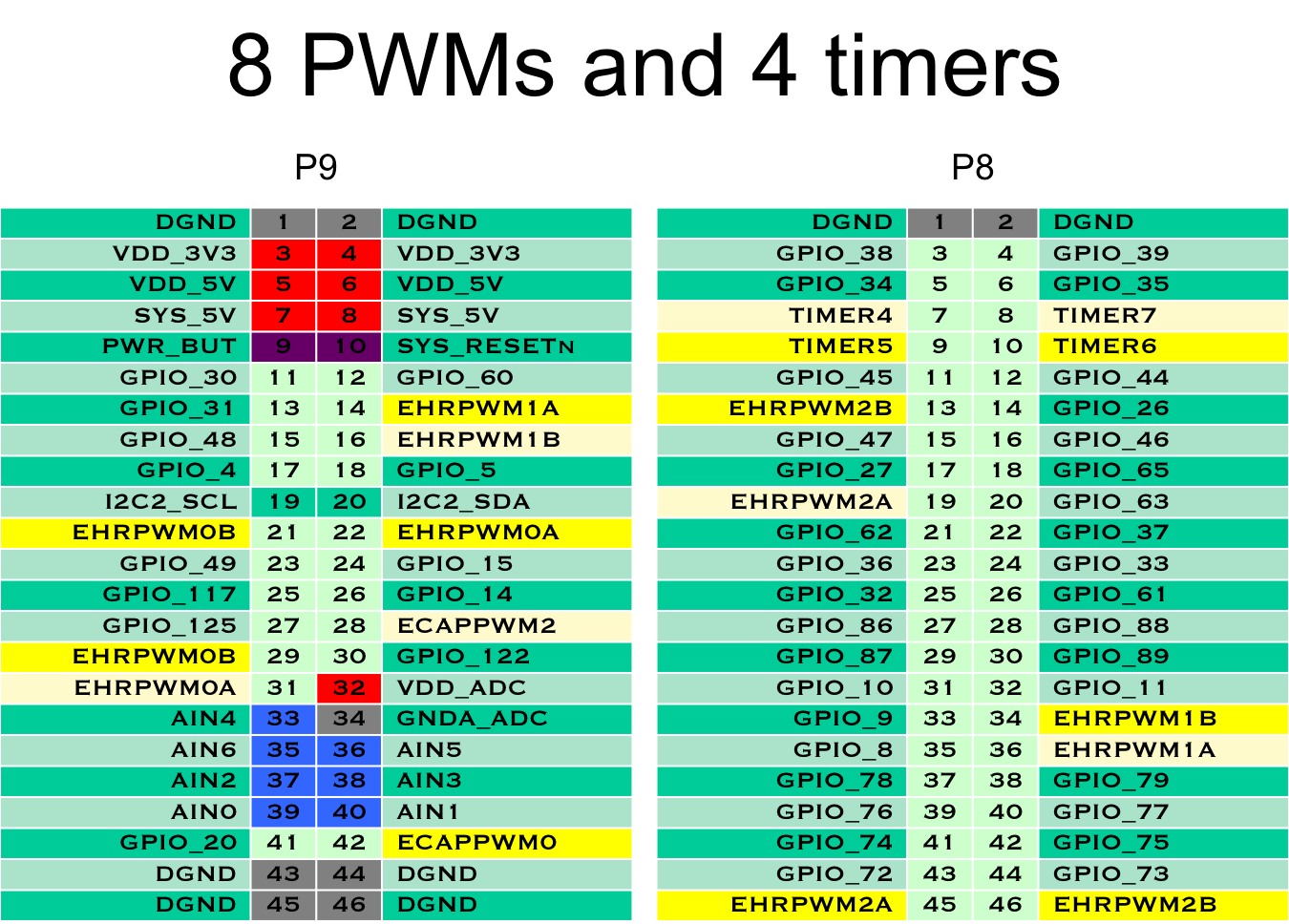 Power down your BeagleBone black and move the jumper from pin 8 of the P8 expansion header to pin 13.  Then run this script:

Your LED will slowly get brighter until it reaches full brightness and then shuts off when the script ends.

In my next post, I will show how we can read the state of a button with python and the Adafruit_BBIO library.  In the mean time have fun playing with the LED.
Posted by Jon at 4:58 PM