Comparing the BeagleBone Black and the Spark Core: Remotely turning on an LED

Lets look at how we can use socket.io with bonescript to control one of the user LEDs on the BeagleBone Black.  I used the Cloud9 IDE to write this application so the first thing that I needed to do was to install socket.io where Cloud9 can use it.  To install socket.io run the following commands (Note: I am using Agnstrom Linux, you may need to adjust the paths depending our you flavor of Linux):

Once socket.io is installed, we can open the Cloud9 IDE in our favorite web browser by going to port 3000 of our BeagleBone.  You can do this by opening your favorite browser and entering the IP Address of your BeagleBone followed by colon and 3000 IE:  10.0.1.18:3000.

Now that we have everything setup, lets write the application to control one of the user LEDs on the BeagleBone black.  In the Cloud9 IDE, create a folder called “RemoteLED”.  We will be creating two files within this folder called toggleled.js and index.html.  Lets look at the toggleled.js file first:

We begin by adding the external modules needed using the require function that comes with node.js.  Next we set socket.io to listen for requests on port 3080 and define three constants.

Finally we add an “on” method listener that listens for incoming actions.  In this example, we listen for the ‘led’ action and when a ‘led’ action is received it runs the inner function.  This inner function will turn the LED on if it receives the “on” command otherwise it will turn the LED off.  It also uses the emit function to send a ‘ledstatus’ action back to the client with the current status of the LED.

The interesting parts of this page are between the two “script” tags.  In the first “script” tag we set up a listener that listens for an ‘ledstatus’ action and when it is received it will call the inner function that sets the status label to the message that was received.  This action is sent from the toggleled.js script with the following command:  socket.emit('ledstatus', 'LED is on');

The second ”script” tag contains two functions.  These functions are called when the on and off buttons are pressed and uses the emit function to send a ‘led’ action back to the listener in the toggleled.js script that turns the LED on or off.

If you run this code within the Cloud9 IDE you should be able to control User LED from any computer or mobile device that can connect to the BeagleBone Black.  The web page should look like this: 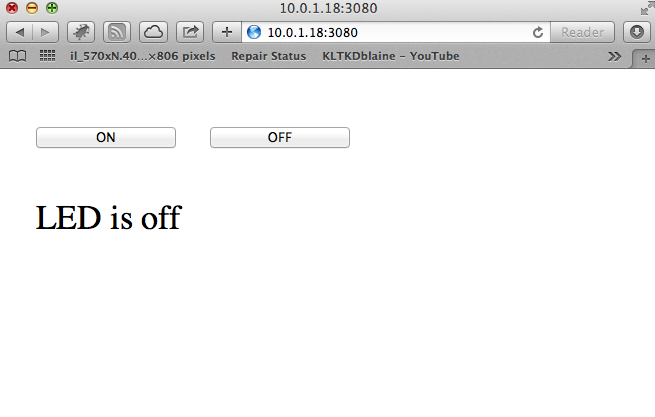 Lets begin by looking at the code that we will flash to the Spark Core:

I do not want to go over the full ViewController class here but I do want to highlight two methods.

The sendRequestWithParameter: method sends a POST request to Sparks Cloud API telling it to turn the LED either on or off depending on what the parameter is.  The parameter should be either “on” or “off” to match the commands on the Spark.  When the response comes back from Spark’s API, acknowledging that the on/off command was received, we then call the getStatus function to retrieve the current state of the LED.

One thing I did notice with the Spark Core is there is a noticeable delay from the time I pressed the on or off button to when the status label was updated.  The delay was less then a second but it was pretty obvious.  I would imagine this delay would not be a problem for most applications but you would just need to account for it.  The response from the BeagleBone Black was all but instantaneous which is what I expected from socket.io.

Spark’s IDE is all right.  I would definitely rate the Cloud9 IDE above Spark’s mainly because the error messages from Spark’s IDE are really unhelpful.  I wasted a lot of time trying to track down a simple typo.

The architecture of the BeagleBone Black’s application is a lot nicer because the client and server components are contained in one application making it easier to update.  However if you plan on making a commercial product, being able to upload the client application to Apple’s app store would be really nice.