The first robot programed in Swift with SwiftyBones

As far as I know, this is the first robot programming entirely in the Swift programming language.  I programmed it as an example of what can be done using Swift with the new SwiftyBones library and the BeagleBone Black.

SwiftyBones is a modular Swift library for interacting with both the digital GPIO, PWM and Analog pins on the BeagleBone Black.  This library is written to make it easy to write Swift applications that run on the Beaglebone Black that interacts with external sensors, LED or any device connected to the Digital GPIO, PWM and/or Analog pins.   You can read about the SwiftyBones library on its github page here. 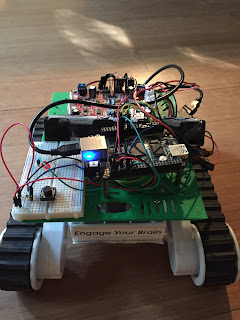 Before I explain how everything works, below is a video of the robot in action:

I use a LED to indicate that everything has been initiated and a button to start the robot. I wired them as shown in the following diagram

Setting up the BeagleBone Black
1.  Get the latest Debian 8.3 image from Beagle Board’s site.  You can find the image here.
2.  We need to unzip the images.  We can do this using TheUnarchiver for Mac.
3.  Now we need to copy the image over to the SD card.  I would recommend using at least a 8 gig SD card.  Everything needed will take up 3.3 gig which will fit on a 4 gig card but you are not leaving yourself much extra space.  I use Pi Filler to copy the image onto the SD card.  Once installed, run the Pi Filler app and follow the on screen prompts.
4.  Once you have the image on the SD Card, go ahead and plug it into your BeagleBone Black and power it up.
5.  If you are using a SD card greater than 4 gig, you will need to manually expand the file system since the image only uses 4 gig.  To do this you can following these instructions.
6.  Now we are set to install Swift.  The instructions to do this are on the iachieved.it site.
7.  The last thing we need to do is to download the SwiftyBones library.  You can do that by running the following command:  wget https://github.com/hoffmanjon/SwiftyBones/archive/master.zip

SwiftyBones provides a script called swiftybuild.sh that can be used to easily compile applications that contains multiple files and subdirectories like this one.  It basically searches the current directory and all subdirectories for any file that has the .swift extensions and then compiles them and builds the application.

The next two methods turnRight() and turnLeft() are very similar to the goForward() and goReverse() methods except we set one track to move in the forward direction and one in the reverse direction causing the robot will turn.

The allStop() method disables the tracks, sets the direction of both tracks to forward and sets the speed of the tracks to 0.  This stops the robot in place.

To understand more about how SwiftyBones works, you can read about the library on its github page here.

Now lets look at the main.swift file.  This is the file that is executed when our application starts.  The following is the code from the BuddyBot main.swift file:

We use the swiftybuild.sh script to compile the application.  This script will search the currently directory and all subdirectories for files with the .swift extensions.  It will then compile all of those files and build the application.

That is how the first robot programming using the Swift language was written and built.  To learn more about SwiftyBones go to its github page here.